Who’s Your Daddy? – Daily Prompt: Identify and Feathers on Friday

The great blue heron saw the egret first. This was the first time they were together in the same cove. Would territorial drama ensue? 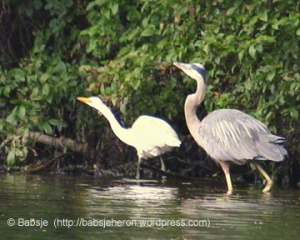 The herons were out in full force that morning. Within half an hour of putting the kayak in on the lake, I saw two adult great blue herons, a fledgling great blue heron, and the first fledgling black-crowned night-heron of the season.

I settled in for a photo session with one of the adult great blues, who was relaxing on one leg atop the fallen pine trunk.

I had fired off about a dozen shots when the heron stiffened – it stayed perched on one leg, but looked alertly to the west. I followed the heron’s gaze and saw it, too – the egret swooping into the cove, then landing out of sight just around the corner behind the trees. Shifting the kayak a bit, I could see both the egret and the heron, but – for the moment – they could not see each other.

Ever since first sighting the egret ten days earlier, I had wondered how the resident herons would adjust to the egret. Would there be high drama and jockeying for territory? Would they peaceably co-exist?

The egret quickly started foraging along the shore, and I was in luck – it was headed in the direction of the great blue heron, and once around the corner, the birds would be able to see each other.

Holding my breath, camera poised, I waited for the moment of truth.

The egret looked once at the great blue heron, and then kept on plying the shoreline, closer and closer to the heron with each step.

The great blue heron looked at the egret, and then kept on perching on one leg atop the fallen pine trunk, looking calmly at the approaching egret.

Well, that was anticlimactic.

After a few minutes more foraging, the egret poised for flight.

The egret took off and flew at eye-level directly towards the heron with gorgeous long, loping wingbeats. It flew so close, passing less than ten feet directly in front of the heron.

The heron didn’t flinch as the egret landed thirty feet away on the eastern shore.

Well, that was anticlimactic.

I settled in again, taking photos of the heron and egret alternately. As I was shifting from the egret back to the heron, I saw it out of the corner of my left eye – an incoming fledgling heron flying over my shoulder, heading for the shoreline midway between the heron on the pine log and the egret on the shore.

The fledgling fished along the shoreline, ignored by the egret and by the other great blue heron perched on the log.

Meanwhile, the egret investigated a green canoe and huge pontoon boat docked at the southeast corner of the cove, and then lazily flew off across the channel and landed under the pines for more fishing.

The fledgling then took off across the channel, and landed behind a small rocky island snugged against the southern shore.

Without warning, another adult heron suddenly swooped in from the north hot on the tail of the fledgling. The adult landed at the small rock island and chased off the fledgling, which was last seen flying around the bend towards the southern lake.

The fledgling handily dispatched, the adult heron then darted across the channel, and landed on the shoreline about forty feet from the egret. The heron stared at me for a few moments, then took off running down the shoreline towards the egret, with back feathers erect and head angled upwards in a classic territorial display. Quickly it closed the gap, and came right up next to the egret.

The egret didn’t seem to be afraid of the heron, though. It continued to forage along the shore all the while the heron was approaching, and even when the heron caught up and they were side by side, the egret didn’t show alarm – the egret simply jumped-hopped-flew about ten feet and landed on a log jutting out over the water.

The heron continued chasing after the egret, closing the gap once again, and once again, the egret calmly hopped-flew a short distance away, landing on the same shore as the pursuing heron.

Eventually, the great blue heron prevailed and the egret flew off to the boat ramp docks to the west.

Was there drama? Yes, but not high drama, no aerial bird fights between heron and egret, no loud frawhnking and croaking calls piercing the air. It was rather sedate all along, and by the final encounter, the great blue heron pursuing the egret wasn’t showing much of a territorial display of erect feathers at all.

The events that unfolded this day helped me identify which adult heron was the fledgling’s mother and which was the father.

In the sentence right above this photo, I wrote “She remained perched on one leg on the log the entire time.” The fact that this adult did not try to chase off the fledgling tells me it is a female.

The great blue heron that chased off the fledgling and the egret is an adult male.

Discerning the sex of great blue herons is difficult. The most-often cited tip in the literature describes the male and female as looking very similar but the males are somewhat larger. Unless you have two herons very near each other, the size difference is difficult to judge. Another tip suggests that males can have darker legs, but again, that’s relative and not universal. You can also ascertain their gender by observing mating behavior, but that isn’t recommended unless there is a way to do so without disrupting or endangering the success of their breeding. The Cornell webcam is a safe resource for that sort of observation.

What I have observed first-hand over the past decade is that female great blue herons are more accepting than males of the presence of other herons. My simplistic theory is that if an adult does not chase off a juvenile or fledgling, the adult is a female; if the adult puts on a territorial display and chases off another heron, the adult is a male.

That’s my story theory and I’m sticking to it.

Thanks to Michelle W. and WordPress for the Daily Prompt nudge, and to Charlotte at Prairie Birder for the Feathers on Friday nudge.