The subtle shift in the tilt of her head alerted me to an unseen presence.

The great blue heron perched in a resting posture, stationary and gazing off to the east under half-closed eyes, and I sensed that she was going to go to sleep standing there.

Secure along the shore of the cove, hidden in a blind of natural cover where she couldn’t see me nestled there amid thick layers of leaves and branches, I had settled in for the morning’s photo session.

It was mid-morning, her early fishing and feeding were done, and the log next to the blooming pickerel weed made a secluded and quiet resting place.

She was unmoving and serene, a study in tranquility, and those qualities were once again contagious that morning – I felt the peacefulness of the space we share, as I always do in the presence of herons.

At left, the great blue heron perches on a log deep in the secluded cove. She had been resting in this position for a long time, until a subtle shift of her head, at right, signaled a sudden watchfulness.

Half an hour had elapsed while we both rested there in the cove, when a subtle but unmistakable shift in the tilt of her head signaled that she was alert and watching something on the opposite shore. Lulled into a sense of complacency, I thought to myself that it was probably just the Irish Setter I had noticed ambling along the trail when I paddled into the cove that morning. 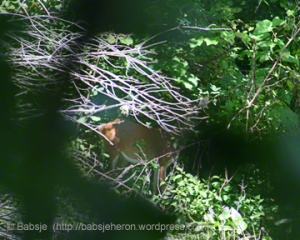 Looking through leaves of my natural cover hide/blind.

The heron stiffened upright suddenly, as though coiled for action. Something, intuition perhaps, told me it wasn’t an Irish Setter at all. Maybe the fox I’d photographed there a few years earlier was back! Their coats were a similar color.

Hastily, I turned around in the leafy hide, pushed aside branches, thrust the camera into the leaves and fired off a few shots. I’m a staunch proponent of photographing from the seclusion of a blind or hide for the good of the wildlife, and you can see in this photo the unusual point-of-view that happens when elements of a “natural cover” hide get into the shot.

Deer along the banks of the cove, directly across from the great blue heron.

Gingerly, I readjusted the leaves and branches of my make-shift hide to free the camera lens, moving excruciatingly slowly to not alert the animal to my presence there in the cove. Holding my breath, I leaned outward just a bit more and stared through the lens directly into the eyes of – not an Irish Setter nor a fox – a large, mature deer, a first-ever deer sighting in the cove.

For forty-five minutes that morning, the three of us – great blue heron, white-tailed deer, and human – shared the lower cove. The deer watched the heron durng brief breaks in munching tender leafy bushes along the shore, but didn’t seem at all aware of me. The heron also didn’t pay any attention to me, but watched the deer intently, at one point flying about ten feet for a closer view of Bambi.

And me? I watched both deer and heron with my heart on my sleeve. This was the closest ever I’d been to a wild deer. Time stood still as I put the camera down and peered through my higher-magnification binoculars. I soaked in those enormous soulful eyes, the tickly-looking whiskers, and the adorable ears that seemed to swivel with their own sense of direction, the better to hear us with as the children’s fable says.

The encounter ended as all such wildlife-human encounters should end, utterly without drama: nobody spooked or flushed anybody.

The deer finished munching his greens, turned and sauntered softly back into the woods.

The great blue heron stared after the deer for a long while, and then once again took up her perch on the log.

And I, still wordless from the wonder of what had just unfolded, paddled on to the next lake, smiling all the way.