The threatening skies weren’t the only peril facing the great blue herons on the nesting island. 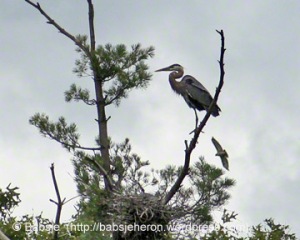 Great blue heron guarding the nest while a red tailed hawk circles in the background.

In heightened vigilance, one heron stood sentry above the nest while it’s mate stretched out low over their clutch of eggs.

They had mated not quite four weeks earlier, and predators already had designs on the eggs and chicks. The top photo here shows a red tailed hawk circling menacingly.

Less than 48 hours earlier when only one heron occupied the nest, a red tailed hawk landed on the treetops mere feet away from the nest. Great blue herons have little to fear from predators in a nest seventy feet up, except for eagles, great horned owls, and certain raptors. This red tailed hawk is one such predatory raptor.

The photo above shows the scene two days before, with the red tailed hawk lurking at the left of the frame. At right, the heron in the nest is on alert, cap feathers erect in alarm. Above the hawk, several smaller birds wheeled and spun and scolded the hawk in a cacophonous squabble that was audible in my hide all the way across the channel.

My heart was in my throat as I watched the scene unfold. I have written before about the symbiotic relationship between cormorants and great blue herons, but on this day there were no cormorants about. Instead, jays and grackles came to the rescue.

The standoff went on for quite a while, but when it was done, the jays and grackles had vanquished the red tailed hawk.

If a hawk can be said to “slink off” in defeat, this one certainly did. As you can see from the photo below, not content with the hawk merely leaving the island, one of the smaller birds latched on to the hawk’s shoulder and pecked at the hawk’s head as they flew off together.

One of the smaller birds rode on the hawk’s back, pecking at his head.

Thanks once more to Prairiebirder Charlotte for her Feathers on Friday prompt.

Thanks to the kind folks at SkyWatch Friday.

Thanks to Ed Prescott for the Sunday Stills: Birdhouses prompt.

Thanks again to Stewart Moncton for the Wild Bird Wednesday prompt.

Thanks again to the kind folks at NaBloPoMo for the National Blog Posting Month challenge this November.

Thanks also to Skinnywench for the Word a Week Challenge: Two. (Two birds flying together, hawk and hitchhiker.)

Thanks to Ailsa for the Weekly Travel Theme: Delicate. (How delicately, intricately woven is the nest.)