There had been reports in the local media about an alligator sighting at the lake, and I was happy that the red kayak and I weren’t on the lunch menu that day. 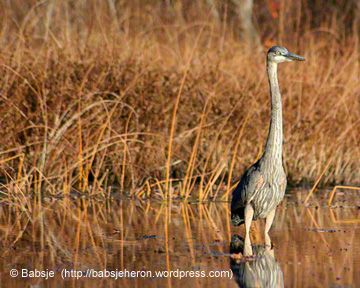 It was November, and for the first time since early summer, I took the red kayak out for a paddle in the backyard lake.

It was exciting to catch a glimpse of a great blue heron in flight from the corner of my eye. He veered towards the small island in the cove at the eastern end, landed, and then slipped quickly into the brush and marshy reeds, just out of sight.

Slowly, surreptitiously, I paddled along the opposite shoreline on an eastward course, parallel to the shore of the small island, opposite the side where he had taken cover.

The paddling was tricky, the small wind-driven waves a challenge for the flat-bottomed whitewater kayak.

Slowly, I eased into position in a natural-cover hide, stern backed against a stand of reeds for stability, and craned my neck to get into position, binocs raised.

I wanted to see which of the two herons from last summer it was – one had long graceful breeding plumes dangling from the back of it’s cap, the other did not – but the sticks and shrubs perfectly camouflaged the heron lurking in the brush.

At last, slowly, the heron crept forward into a stand of reeds at the tip of the island.

I could just barely see a glint of the white and yellow patch on its face, just above the bill, but the neck and body were obscured.

I held my breath and watched and waited, binocs trained on the reeds, trying so hard to keep the kayak motionless, looking for any telltale riffling motion or parting of the reeds that would give a better view of the heron.

And then the heron emerged and stood motionless.

His watchfulness was palpable.

Cautiously, he stepped closer to the water’s edge, and I trained the binocs on his neck for the telltale plumes, and then it dawned on me.

This was neither of last summer’s herons.

It was a new heron.

I took it all in through the binocs, elation blooming by the second: the dark blueblack feather cap, the dark bill, the ruddy feathers…

We stayed together for about half an hour, the heron feeding and preening and feeding again, and ruffling and shaking the water from its feathers from head to toe just like a wet dog shakes it off.

Then I turned the kayak back towards home so the heron could feed in peace as long as it could, with the cold weather coming. What a lovely paddle it was.

No juvenile herons at all were sighted at the big lake that year.

How very wonderful to know the brood succeeded here at home.

Thanks to Michelle W and WordPress for the Weekly Photo Challenge: Juxtaposition. (The juxtaposition was the great blue herons’ breeding success at the small lake compared to their failure at the large lake.)

Thanks to Paula for her Thursday’s Special Non-Challenge Challenge.

Thanks to Sue for her A Word a Week Photo Challenge: Undulate prompt.