Great Blue Herons – How Can you Tell them Apart?

“But the Herons are all the same!” exclaimed my friend in an exasperated tone.

I replied to him, “Are all Retrievers the same? All Irish Wolfhounds?”

…Might as well face it, I’m addicted to…Herons. I can talk your ear off about Great Blue Herons, and that’s what I was doing with an old friend many years ago when he suddenly blurted out that all Herons are the same. He eventually came around and acknowledged that he could tell individual dogs apart and conceded that I could probably do the same with Great Blue Herons.

Until we have facial recognition software or AI for birds, photographers can rely on several clues to help identify individual birds. Unique behaviors, specific territories, distinguishing features, scars, and more. I’m working on the facial recognition thing, but in the meantime I do rely on all of those cues, especially physical traits.

Readers of my blog may recall the gorgeous Heron with a broken leg I wrote about earlier. The adult Great Blue in the top photo is a another good example: he has a badly broken toe that has healed at a strange angle, which you can see in the insert of this next photo.

Those two Great Blues have been lucky to survive and thrive despite their broken bones. That broken leg could have meant a slow death for her. Unlike the Herons, I have had excellent medical care for my own recent break:

But enough about me, back to the alpha male Heron.

“To sit and wait is as important as to move” could be a universal mantra for nature photographers, one I was actively practicing Friday from a secluded hide in the cove as the Great Blue Heron sunned herself on the half-submerged logs.

Unexpectedly, however, after half an hour of lazing about, she darted across the narrow channel and launched herself skyward to the west in a flurry of feathers and sqwaks.

Just as she was aloft, an alpha male in hot pursuit swooped down from the east to claim his territory in the cove. I eagerly panned the camera from my hiding place, trying without success to capture the fray, trying and failing to get both birds in a single frame.

The female vanquished from his turf, the male stood on the shore where he had landed – not ten feet away from me – and gazed after her disappearing form.

Only after a few minutes had passed did he turn around, and only then did he see me right there.

The tension was palpable. He stood stock still for a moment, sizing up the human interloper floating in his turf, and then started to erect his back feathers in a territorial display as if to tell me the cove is his. 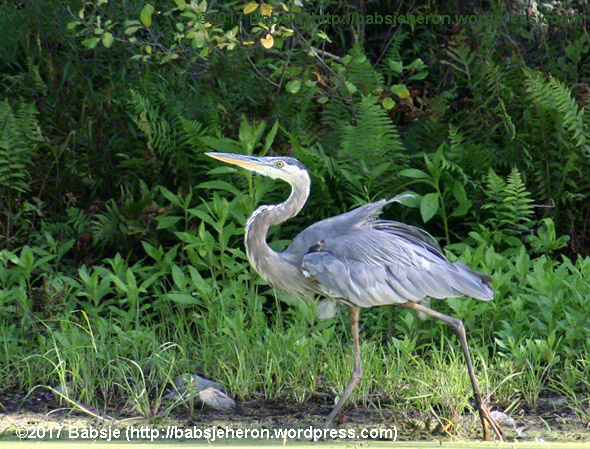 I have watched this sort of feather display before, but it was always aimed at another Heron. This time, though, it was unmistakably targeted at me.

It was a silent dialogue between Heron and human about who’s the alpha bird.

I let the Heron win.

How could I not?
/
.
Bald Eagle and avian PSA for bird lovers, not to derail my own post: Two Bald Eagles have died in my county, on my river from poisoning, an adult female Bald Eagle and an Eaglet – victims of unintentional rodenticide chemicals. If your home or property are visited by rodents, please ensure that any rodent poison used is not an SGAR type (which some professional exterminators still use). Any birds or mammals that eat the poisoned rodents will themselves be poisoned. Reports of poisoned creatures include Eagles, Coyote, Foxes and Bobcats. It is especially concerning for the Eagles, which have only been reintroduced here within the last four decades. There is also concern for the Great Blue Herons which also consume small mammals like Chipmunks.

.
.
.
This post is prompted by the Lens Artist ladies (Tina, Amy, Patti, and Leya) and Cee Neuner, all of whom encourage the community. This week, the Lens Artists focus on gorgeous photos with the theme of Feet and Shoes. What a fun topic! In addition to the Great Blue Heron’s broken toe, you have seen my own broken heel selfie. Feet can be fascinating.

Thanks to Cee for her Hunt for joy. I don’t know if this challenge is still on, but I really like the idea of searching for joy. The Herons bring joy.

Folks, now that some areas are opening back up, please consider supporting your local Arts communities – whether music, theater, crafts, visual arts venues, and others. All have been impacted over the past year and they need your love.

From December 4 through January 28, 2020, my Great Blue Heron photographs were once again on display on the walls of the lobby and theater in a free one-woman show at the Summer Street Gallery, of The Center for Arts in Natick.

.
Thanks to Erica V and WordPress for the recent WPC: Place in the World. My favorite place is where the Herons are, of course it is. And the Herons? Their place is near the water, but also on the gallery walls and my blog. How else can I share them with you?

Thanks also to Ben H and WordPress for their WPC Challenge: Liquid. The Herons are drawn to water, as am I.
.