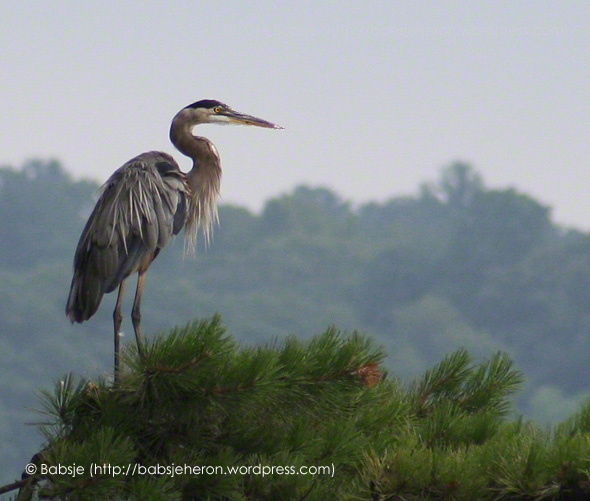 Portrait of a Great Blue Heron on Bough – babsjeheron

If you smile at me I will understand,
‘Cause that is something everybody everywhere does in the same language.

Let’s go on a walk – er run – down memory lane today to honor the memory of those affected by the Marathon bombings here in Boston a few years ago and to support the 30,000 runners taking part today, the 126th running of the Boston Marathon.

I am a solitary walker.

And yet, there I was with thousands. Walking the Boston Marathon. All 26.2 miles. Twice.

For five years, I lived right on the marathon route. In fact, it cuts through the lake where I spend time with the Herons and Hawks and Egrets and Swans. The photos of the beautiful Mute Swan bathing were captured less than 20 yards from the Marathon route, as were the Bald Eagle eyeing the Great Blue Heron fledglings and the Great Egret looking at that Amtrak train as a migration option.

People who know me are aware that I’m recovering from a bad fall six weeks ago, and the only marathons I am doing for now are in my sweet dreams.

The photos below were taken from my street during the 2014 running of the Marathon. It was a poignant year, one year after the 2013 Boston Marathon Bombing. Certainly the bombings at the finish line of the 2013 race were not expected. For the 2014 running, I had expected that things would be different – new security, new logistics, new “motivations” for some, etc. Media coverage in the months leading up to the race had ramped up, and I was prepared for the intense “Boston Strong” focus, but I was not expecting the emotional experience of seeing the many yellow shirts with “Team MR8” in honor of Martin Richard, the eight-year-old who died in the blast.

There, beneath the lettering MR8 on those shirts was the word “peace” in Martin’s childish penmanship, the same young handwriting on his now-famous poster that says “No more hurting people. Peace.”

When I saw that simple word “peace” through my lens, I wept. I sat down on the wall and wept unexpectedly. 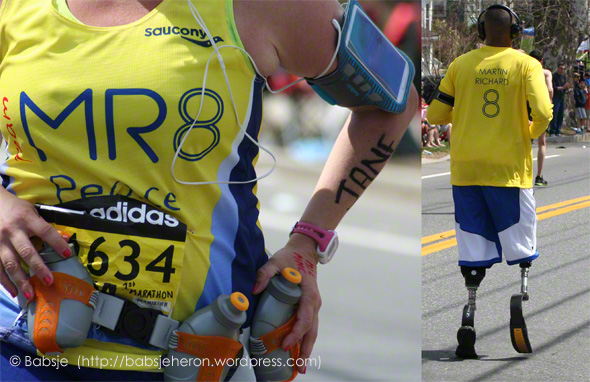 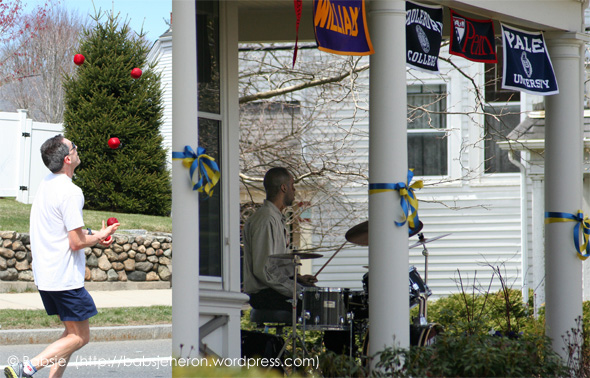 Juggling and all that jazz.
The drummer played non-stop for six hours, and the juggler kept the balls in the air for 26.2 miles – babsjeheron

This was the Hoyt’s 32nd and final Boston Marathon – babsjeheron.

Folks, I have written here before that this is a politics-free space. You won’t hear me advancing any political agenda. Posts here are not opinion pieces about current events.

HOWEVER, failing to weigh in on the heartbreaking events continuing to unfold in Europe would be exceedingly tone-deaf on my part.

I wrote back in December “Tis the season for wishes of peace on earth, goodwill to all. But wait. On second thought, why should those sentiments be extended only during the holiday season? I encourage peace on earth and goodwill to all for every season of the year. May 2022 bring you peace, health, happiness, and joy to all.”

And now in February March nearly April, it seems my sentiment from only two three four months ago has fallen on deaf ears. I continue to pray that it is still not too late to turn the tides of war.

The Boston Athletic Association has not remained neutral for the 2022 Marathon: in support of Ukraine, the B.A.A. has announced that it will not recognize the country affiliation or flags of Russia and Belarus.

Cee Neuner, Debbie Smythe, and the community of Lens Artists encourage the entire international network of photographers and writers. Please click the links below to see the beautiful offerings from these wonderful photographers.

The focus for this week’s Lens Artist challenge hosted by Anne is “Colorful Expressions.” The Boston Marathon is a sea of many colors.

.
Thanks to Debbie for her Six Word Saturday: One Square Short of a Quilt.

Thanks to Cee for her CBWC: In the Distance. It doesn’t get much more distant than Comet Hale-Bopp:

The Great Blue Herons once again graced the gallery walls through February 26th for a one-woman all-Heron show at the Summer Street Gallery, of The Center for Arts in Natick.

The Center for Arts Natick believes the arts are essential to a complete human experience and to the creation of a vibrant, healthy community. Since 2001, TCAN has been housed in the circa 1875 historic Central Fire House, where the Summer Street Gallery provides an opportunity for accomplished visual artists in the region to have their work prominently displayed for TCAN’s diverse and loyal audience.

Some of the images from my January February 2022 TCAN show have been placed in the online Art gallery, with more to be uploaded in coming days. You can be a fly on the wall! Please CLICK HERE to see the Great Blue Herons gracing the gallery walls.
.

Folks, now that some areas are opening back up, please consider supporting your local Arts communities – whether music, theater, crafts, visual arts venues, and others. All have been impacted over the past year and a half and they need your love more than ever.

Be a fly on the wall! Please CLICK HERE to see the Great Blue Herons gracing the gallery walls.
.