I blame it on the Beaver lodge.

No, that’s not right.

I blame it on the Beavers.

Or more accurately, on the beady eyes peering up at me from the shallows near the shoreline.

Actually, that’s not correct either.

I blame it on the absence of beady eyes just above the surface.

While kayaking one day some time ago ago, I discovered a Beaver lodge in the cove, the first one there in at least a decade. I took a few photos of the tall tangle of branches and twigs, but was more interested in seeing, and photographing, a Beaver. (I had never done that before, Muskrats, yes, Beavers, no.) As luck would have it that afternoon, there were two Beaver kits paddling around the point not far from the den, but they both quickly slipped beneath the surface and disappeared before I could focus the camera.

So, a few days later I went back to the cove to try to photograph the Beavers.

This, of course, was a mistake.

I learned long ago to open myself, and my eyes and camera, to whatever experiences and sights the lake brought forth at any moment. I had learned the hard way that “trying” to capture a specific subject meant that I would be missing out on what was unfolding right before my eyes. Mindfulness is a great attitude for a photographer.

So, there I was that weekend in the cove fifty yards or so from the Beaver lodge, scanning the surface of the waters with my binoculars, looking for a pair of beady eyes or a tuft of greenery being dragged along, trailing a small wake behind.

A flurry of activity at ten o’clock caught my eye and I paddled a bit closer and refocused the binocs.

Nope, not the eyes of a Beaver: a swarm of Dragonflies flitting and alighting on something, maybe a leaf.

I padded closer still to frame the swarm and through the lens realized the leaf was a feather, a single gorgeous raptor feather.

And as I was dialing down the lens for a closeup of the feather, a shadow passed directly overhead, and I saw a reflection framed on the water a few yards south – a Great Blue Heron.

Without thinking – without having to “try” at all – I lifted the camera and fired off this one shot you see above as the Heron flew by.

I almost missed the photo because I was looking down when I should have been looking up.
.
.

And here’s that Meteor I promised in the post’s title. One occasion when I wss looking up at the right time in the right place: (I hope you weren’t expecting to see the Heron and Meteor together in the same photo?)

Watching meteor showers and photographing comets both put me in touch with the infinite in a way that nothing else can.

There’s something primal about laying back on a grassy hillside watching the summer Perseid meteor shower put on a show overhead.

Standing on that same hillside before dawn on a frigid November morning photographing the Leonids, cold of body yet warm of being, has the same effect.

As long as we’re looking really far up, why not a Comet? 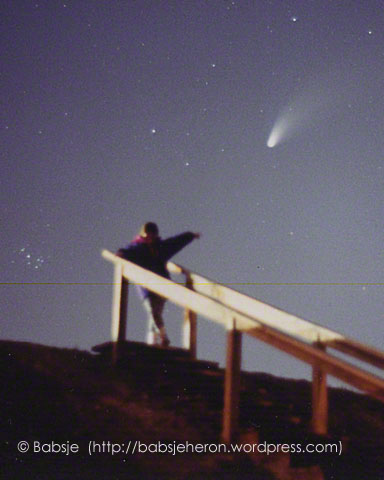 During the year of Comet Hale-Bopp, we watched and photographed almost daily for the duration, tracking the comet’s position on paper star charts. We experimented with all of the low light film we could find, comparing the quality of color reproduction and sharpness. Lacking any idea how long an exposure needed to be in order to clearly see the comet on film, and without a timer on-hand, my daughter hit on the Hippopotamus technique: she would depress the plunger on the cable release and hold the shutter open while counting out loud “one Hippopotamus, two Hippopotamus, three Hippopotamus.” It worked from the very first photo! We had a great time together, just the two of us viewing the comet through my old 35mm Konica and small toy telescope.
.

.
This post is prompted by Cee Neuner and the creative and inspiring Lens Artists Tina, Amy, Patti, and Leya, all of whom encourage the community of photographers and writers. This week, the Lens Artists have invited Sofia Alves of Photographias as guest host. The focus this week is Looking Up, Looking Down. Please check out their gorgeous photos at the links listed below. My submission includes a case when i should have been looking up but was not, and two photos where i was looking very far up, if not far out!

Thanks to Cee for her Hunt for joy. I don’t know if this challenge is still on, but I really like the idea of searching for joy. The Herons bring joy.
.

Folks, now that some areas are opening back up, please consider supporting your local Arts communities – whether music, theater, crafts, visual arts venues, and others. All have been impacted over the past year and they need your love.

Be a fly on the wall! You can CLICK HERE to see the gallery walls with Herons .
.

My daughter strikes a pose with Comet Hale-Bopp.

Me and my comet,
strolling down the avenue

With apologies to Judy Garland

It doesn’t get more out of this world than Comet Hale-Bopp, poised above my daughter’s shoulder.

(We now return to the Great Blue Herons with thanks for allowing this temporary derail.)
.

.
.
Thanks to Ben H and WordPress for this week’s WPC Challenge: Out of this World.

And more thanks to Ben and WordPress for today’s Daily Prompt: Above.

.
.
From July 1 through July 30, 2016, I was the Featured Artist of the Month at the Summer Street Gallery. The Great Blue Heron photographs once again graced the walls of the lobby and theater in a one-woman show at The Center for Arts in Natick. In addition to the visual arts shown at the gallery, TCAN has a lively, dynamic lineup of upcoming performing artists.
.
.
Through July 13, 2017 I was a Featured Artist at the Five Crows Gallery in Natick, MA. Drop in and see the work of the many wonderfully creative artists who show there when you’re in the area.