No crumpled birds littering the island floor, no sodden nestlings floating in the waters nearby…

When I arrived at the island, the nest was entirely empty. Both chicks had definitely fledged for good. My job as shepherdess was complete for that season. It had been only a few days shy of three full months, and I had seen them through from building the nest to fledging. 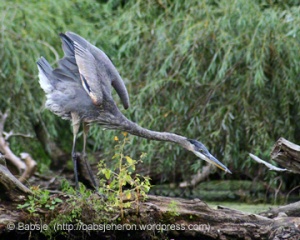 Great blue heron fledgling focusing intently while stalking a fish in the cove three weeks after leaving the nest.

It was an emotional realization, a few tears of joy for them and their new soaring life, and some of sadness at the thought of never watching that heron family in the nest again. At never hearing the sometimes sweet, sometimes raucous chih-chih-chih…chih-chih-chih of the chicks at feeding time, so loud it could be heard above the din of boat traffic – so head-turningly loud that people who didn’t know what was afoot would stop and turn their canoes towards the noise to see what it was.

I wanted to see proof for myself that their maiden flights were a success, and so started a circumnavigation of the southern lake, staying close to the shoreline, binoculars in hand, looking for the fledglings. Close to the island, I found  no crumpled birds littering the island floor, no sodden nestlings floating in the waters nearby.

Two-and-half hours after beginning the exploration, I spied a fledgling on the far southwest shore! I kept a good distance to avoid interrupting his foraging – every morsel counts at less than 24 hours out of the nest – and took a few photos through the telephoto. More little tears. (Yes, I can be sentimental and silly.)

Satisfied at having found a fledgling safe on the shore, I paddled back to the special cove nook, to have oatmeal and coffee and watch the empty nest in hopes the chicks might return.

I was reading a book, floating in the shade, the waters were like glass, so very quiet you could hear the…

… You could hear the soft frawhnk of a heron in flight…

… In flight towards the nest.

One of the adults soared over the island, then swooped onto the tallest branch of the nest-cradling tree.

And not two minutes later, another much softer frawhnk, as a fledgling glided up to the nest and settled back home. Goosebumps!

And then came the music to my ears:

.
.
Thanks for the Weekly Photo Challenge nudge Sara Rosso and WordPress.
.
.