Beautiful Great Blue Heron: The One that Didn’t Get Away 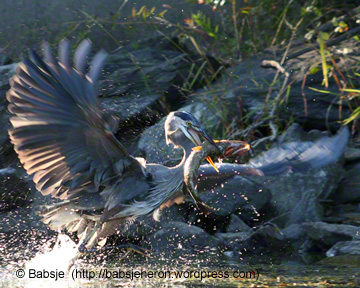 If birds can feel joy, this smiling Great Blue Heron certainly must be joyful in this moment – babsjeheron

If you smile at me I will understand,
‘Cause that is something everybody everywhere does in the same language.

He wasn’t one of the regulars, the usual happy fishermen and boys who gather on the sloping tunnel sides. The Great Blue Heron always gave those other fishermen a wide berth, but this man was different. He was using bait – big-looking silvery bait – and his fishing gear was ample and good.

I nosed the kayak smoothly, silently into the middle cove, when suddenly, a flash of blue-grey to my left – the female Great Blue Heron swooped onto the western shore.

I watched her foraging from a respectful distance, not wanting to get too close lest my presence scare her off, anxious about the solo fisherman casting into the cove from his perch along the tunnel overpass.

I felt unease for the heron, but she continued prodding the mud in her corner of the shore, occasionally venturing out into deeper waters, stalking what was beneath the surface there, dallying until her interest waned or until the prey moved on.

And then she made her move, and strode purposefully north, until she reached the tunnel.

And the lone fisherman.

I followed behind her, 10 feet back, out of her line of sight, parallel to the shore.

In the past when she reached the tunnel, she would  rise from the water on strong wings, and cross the channel, clearing it and going fully beyond in 3 loping wingstrokes.

Each time I was there, I raised my camera to catch her mid-stroke, framed by the tunnel entrance, and this day was no different.

I got into position, focused across to where I knew her flight path to be, and waited.

This time, she landed short of her usual place on the north shore.

She landed directly in front of the fisherman, directly in the path of his perilous casts!

I hovered on the left bank, alarmed.

Would he hook her?

Would he accidentally wrap his filament around her throat?

Would she chase after his cast and take his bait fish, swallowing hook, line, and sinker?

I paddled cross the channel and struck up my usual fisherman’s conversation with him, edging closer in to be able to rescue the heron from his line.

He settled back into the rhythm of his fishing.

Heron settled in, watching the baitfish soar out on the end of its tether, occasionally swooping out to pick up the leftovers after he reeled back in.

I settled in to squeeze off photos here and there.

We established a routine, the three of us – me in the middle, 5 feet from him, heron only 4 feet beyond me.

At least, I thought, I could rescue heron if he snagged her or if she bit down onto a hook.

And then I heard it.

He was whistling to Heron!

And he tossed a small silvery fish her way.

She lunged and swallowed in one exquisite movement!

And so it went for the next half-hour, he would cast out, and sometimes she followed his lure, sometimes not.

Every 4th or 5th cast, he’d toss a silvery prize her way. She always took his treat and was eager for more…so eager she moved in closer and closer to him, and to me.

Too close for any good camera shots.

What should have been too close for her comfort. 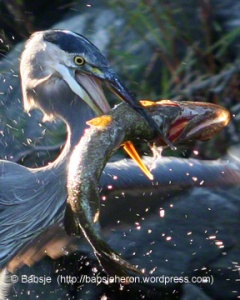 As you can see from the photos here, no harm came to the Great Blue Heron that day. The final prize the fisherman tossed to her that day was this huge pike.
.
I love a happy ending.

.
Thanks to Cee for her CFFC: Water Found in Nature. Today’s post has water found in nature. Plus a Heron!
.
This week’s Lens Artist challenge from the amazing artists Tina and Patti, Amy, and Leya, focuses on our One Photo Two Ways. My example is the full frame photo and then a crop. Readers of this blog know I’m both fine art photographer and nature photographer, but I’m also a photojournalist, a stringer for a national newspaper syndicate. The rules are vastly different for fine art and photojournalism. In journalism, no editing is permitted, not even a single pixel can be adjusted, and often times even cropping is not allowed. For fine art, sometimes it seems the opposite is expected – what makes it ‘Art’ is the artist-photographer’s manipulation of the image. The full frame photo at top is entitrly unretouched. You see it exactly as it came straight out of the camera.

,
Folks, now that some areas are opening back up, please consider supporting your local Arts communities – whether music, theater, crafts, visual arts venues, and others. All have been impacted over the past year and they need your love.

From December 4 through January 28, 2020, my Great Blue Heron photographs were once again on display on the walls of the lobby and theater in a free one-woman show at the Summer Street Gallery, of The Center for Arts in Natick.

.
Thanks to Erica V and WordPress for the recent WPC: Place in the World. My favorite place is where the Herons are, of course it is. And the Herons? Their place is near the water, but also on the gallery walls and my blog. How else can I share them with you?

Thanks also to Ben H and WordPress for their WPC Challenge: Liquid. The Herons are drawn to water, as am I.
.